The fifth annual CodeRED event for Central Jersey Alumnae Chapter (CJA) was held on December 11, 2021. Due to the COVID-19 pandemic, the event was held virtually over Zoom. Despite the challenges of a virtual environment, the event was quite a success.

The CodeRED Day of Service is part of a global initiative to introduce millions of students to Computer Science. Taking place on the “International Day of Code”, CodeRED aims to expose, inspire and motivate more children of color, especially girls, to the world of computer coding and technology. There were 14 girls, ages 11-14, from the Delta Academy program who participated in the activity, supported by 8 volunteers from the CJA Technology and Delta Academy committees. 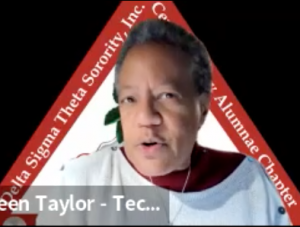 started the session speaking about how computer science was a foundation of her career in telecommunications. Ms. Taylor was encouraged by her mother to “go into computers” after her mom witnessed large computers being rolled into her workplace, a scene not unlike that in the movie “Hidden Figures.” Ms. Taylor loved Math and liked to solve problems so it was a good career to pursue. With a BS degree in Mathematics and a MS in Engineering majoring in Computer & Information Science, Ms. Taylor embarked upon a career that spanned voice, data and wireless communications. In each step, Ms. Taylor told the girls how computer science was integral to the communications network products she helped develop first as a software engineer and later as a manager. The girls came to understand that the different apps on their smart phones are all computer programs running on a computer in their phones.  Ms. Taylor also said that with the widespread of smartphones, the most fulfilling experience was seeing how her efforts and those of other wireless software engineers helped change the way people communicate. 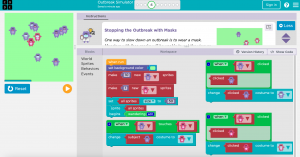 “Outbreak” which was a simulation model designed by code.org that allowed them to see what happens when a virus is introduced into a population. The exercise was both educational and challenging. The girls programmed in a language called “Blockly” which in turn generated Javascript code. As they coded the simulation, they observed the impact of healthy ‘sprite’ characters in the simulation coming in contact with sick ones. They saw the impact of mask-wearing on the spread of the virus. They were able to code ‘probability’ of infection. They also observed the impact of vaccinations in the simulation. Sound familiar? We are all living this now, but these girls learned how computer science can help predict the impact of various remedies to help control the virus.

The feedback on the exercise was very positive. Several girls said they would like to learn more about computer science. Some direct quotes from the girls included: “I learned how you can use coding and probability to test how likely something will happen and how fast it can happen.” “I learned that coding is not as confusing as it seems.” “I learned more coding than I learned at school.” “I learned how block coding and Javascript work together to code things.” “I liked this CodeRed session because I enjoy puzzles and coding, so I thought that this session was really interesting.”

Students were given individual accounts under code.org. This allowed them to save their exercises and continue work on their programs in their spare time. The girls will all receive certificates as a memory of their participation.

This was one of our best CodeRED sessions. The girls learned how computer science can be applied to a real-world situation that they are very familiar with. This gave them a different perspective on the problem and provided them with a great educational experience.