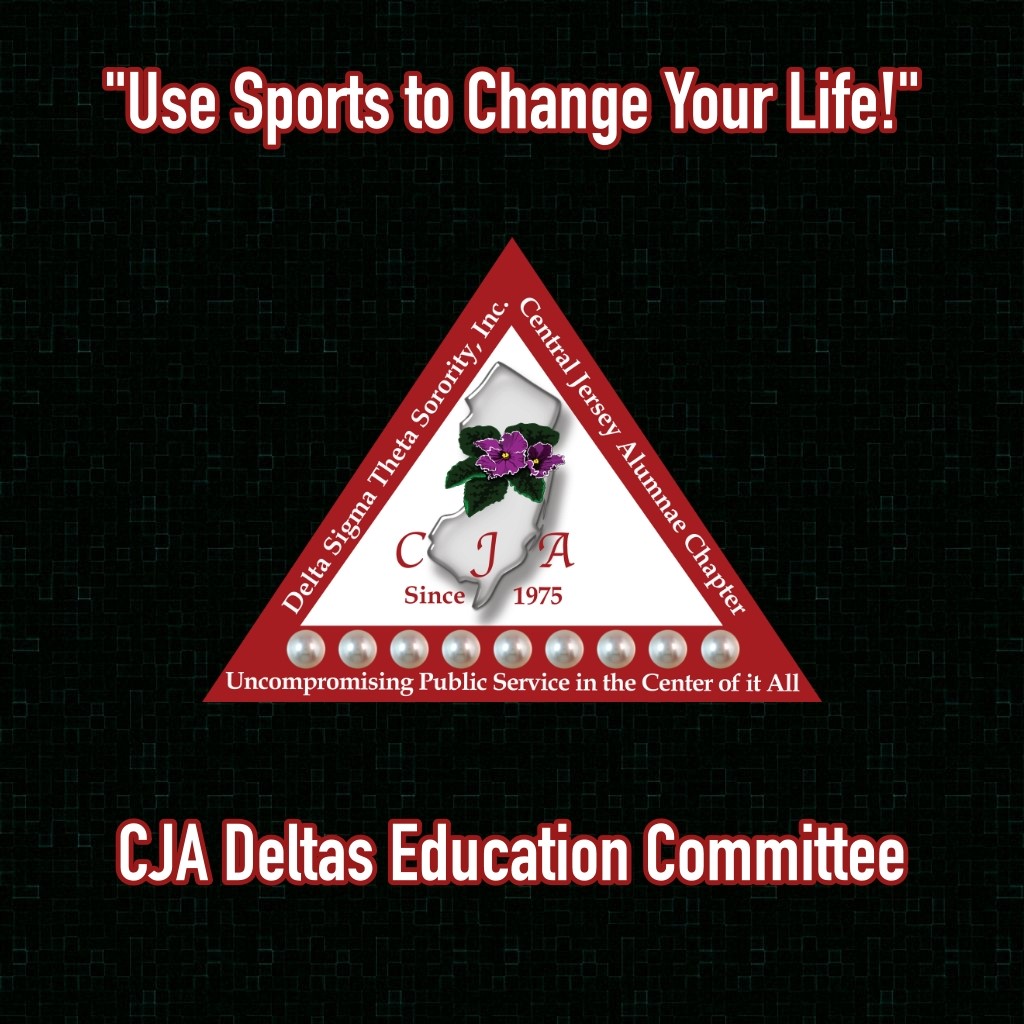 Use Sports to Change Your Life. That was the title of a workshop hosted by the Education Committee of the Central Jersey Alumnae Chapter (CJA) of Delta Sigma Theta Sorority, Inc. on Saturday, January 25th at Franklin Middle School in Somerset. Because a disproportionate number of black students become incarcerated due to increasingly harsh school and municipal policies, the goal was to show how they can use sports to interrupt the school-to-prison pipeline and change their lives. This is the fourth year the workshop has been offered. Event chair and CJA member Brenda Edwards Miller welcomed visitors, explaining that the purpose of the session was to enrich and expose student athletes to collegiate sports opportunities and athletic careers, motivate them to academic excellence, and afford them the chance to have a dialogue with others who’ve used sports to advance themselves. Chapter President Karen Wade Culp also greeted guests. As the parent of two student athletes who used sports to pay for education, Wade Culp encouraged everyone to take advantage of and absorb the information that would be presented today.

CJA member Myra Mitchell facilitated icebreakers for the students and their parents. Thereafter, she assigned all attendees to various labeled tables:  compassion, competitiveness, confidence, determination, focus, honesty, integrity, mental toughness, respect, and self-discipline. Attendees were asked by Mitchell to relate the assigned word to their experience in sports or in life and explain how the word helped them become the people they are today. A representative from each table group then had the opportunity to summarize their group discussion.

Edwards Miller had the honor of introducing keynote speaker Dana Brown, Vice President of Scouting for the Atlanta Braves. A proud product of New Brunswick, Brown, who played multiple sports in high school, commented that he grew up in a single parent home with 11 siblings and that he “used baseball to get out of the inner city.” He attended Seton Hall University on a full baseball scholarship and was ultimately drafted by the Phillies organization. Because of his experience as a player and his role in scouting, Brown encouraged more people to take advantage of baseball, stating that only 8% of black people play the sport. He stressed, “There is lots of money to be made,” and encouraged participants to seek athletic scholarships because “every dime helps.” He told students that they also had to be champions socially and academically.

CJA member Lori Grier introduced the panelists. Each shared information about themselves, allowing attendees to hear a little about their backgrounds in preparation for the next portion of the workshop.

The panelists then engaged in intense discussions with anxious parents and students. Parents participated in the Parent Athletic Circle with Scott where they discussed how to support encourage, and safeguard their student athletes. The students were broken into smaller groups and rotated around the room spending time separately with Lyons, Sherman, Solomon, Thompson, and Williams. Questions were asked, personal experiences shared, and advice given.

Dr. Jennifer Durham, Education Committee Co-Chair, closed the session by having a brief wrap-up of the day. Determination and commitment to both academics and athletics were resounding summary comments. Student athletes left prepared to explore their options and parents left with a plan to support them.

Enjoy the video of the event!