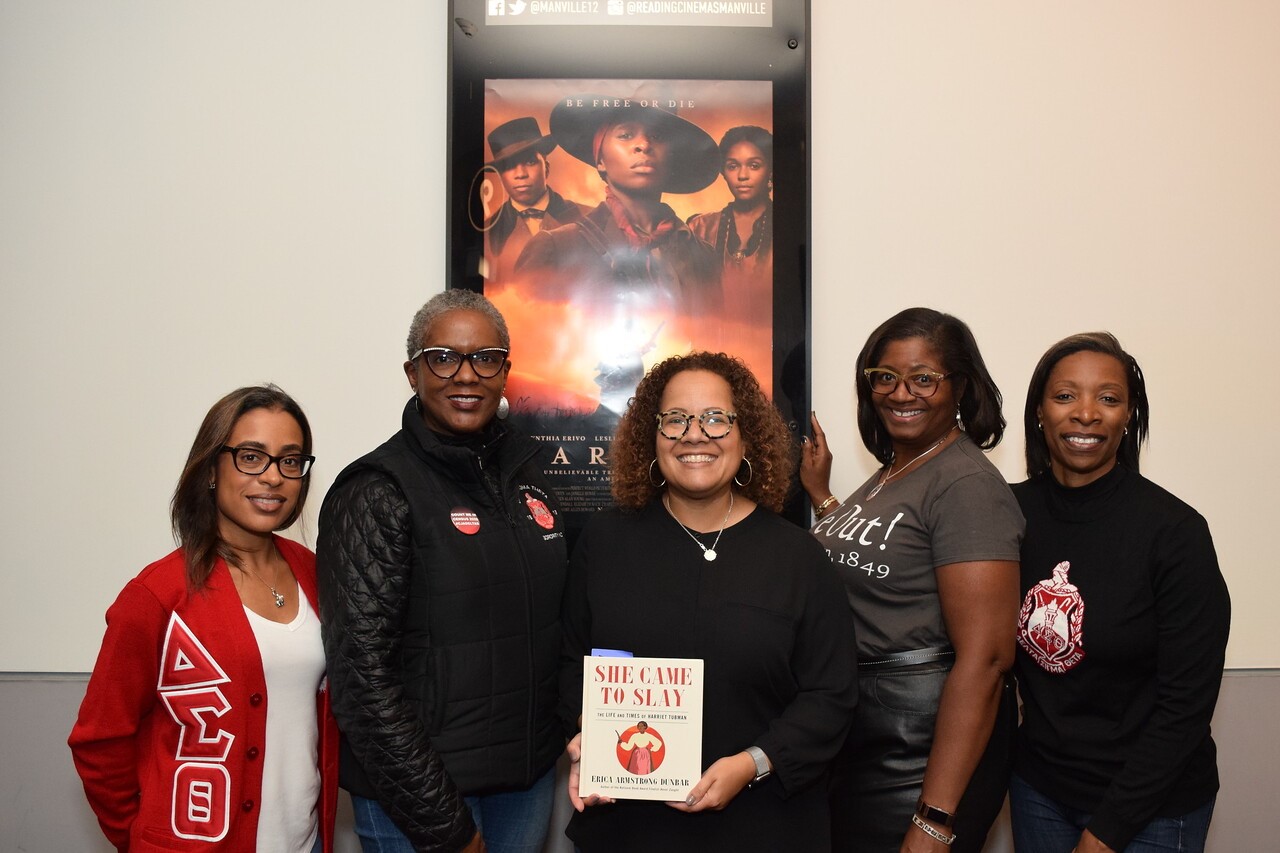 On Sunday, October 20, 2019, the Arts & Letters Committee of the Central Jersey Alumnae Chapter (“CJA”) of Delta Sigma Theta Sorority, Incorporated hosted a red carpet event at the Reading Cinemas located in Manville, NJ. The theater was filled to capacity as approximately 200 members and guests gathered for a private screening of “Harriet,” in advance of the much anticipated nationwide release date of November 1st. This movie tells the story of abolitionist Harriet Tubman, beginning with her escape from slavery to the numerous missions she led through the Underground Railroad to free a multitude of slaves.

The post-movie discussion was as engaging as the movie and was facilitated by award-winning historian, Rutgers professor, and 2017 National Book Award finalist Erica Armstrong Dunbar. Dunbar is author of the book She Came to Slay: The Life and Times of Harriet Tubman. The book was made available prerelease and signed by Dunbar at the conclusion of the event. Among other accomplishments, she is the National Director of the Association of Black Women Historians (ABWH), an organization dedicated to continuing the advancement for the study of black women’s history. The Committee awarded door prizes provided directly from the producers, Martin Chase Productions, to those who contributed to the discussion.

Attendees were amazed that there was so much about Harriet Tubman they didn’t know and disappointed in how little is taught about her in schools. One middle schooler commented that the big discussion in her class was simply “that [Harriet] looks like a man.” We discussed that Tubman dressed as she did to disguise herself, as it was uncommon for women to travel alone. This led us to identify her as a true heroine as we discussed in depth the challenges and dangers she faced during her missions and serving as a spy during the Civil War. Equally important, we saw Tubman as a complete person - a woman. We learned that she loved and lost, but loved again. We saw how deeply she loved husband John Tubman, who took another wife after her escape; and how she mourned that relationship’s demise. Dunbar shared that later in life, Tubman married a man 20 years her junior named Nelson Davis and became Harriet Tubman Davis. Given the gasps from the audience, it was evident that some present were not aware of this. Additionally, many were astounded to learn that Tubman was an activist in the struggle for women’s suffrage.

Viewers were grateful for this experience to learn about the many facets of Harriet Tubman Davis which sadly are not universally known. As such, the movie “Harriet” is an important story that must be told. This was a valuable cultural learning experience for all present.